In addition to the many dining and entertainment options, here are the main tourist attractions near Manila Bay Beach and within its surrounding community, presented alphabetically:

Fort Santiago was a fortress built in the late 1500s by the Spanish government during the colonization of Manila, as part of Intramuros. 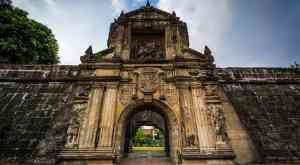 This iconic citadel served as a storage for ammunition, and converted into a prison cell for activists and the political resistance. One of the most famous names imprisoned here was Philippines’ National Hero Dr. Jose Rizal before his public execution.

Fort Santiago was also used during the World War II for formidable purposes—the Japanese kept soldiers and political prisoners in the dungeons to torture and execute.

That’s why this place remains one of the most notable and important historical sites in the Philippines. 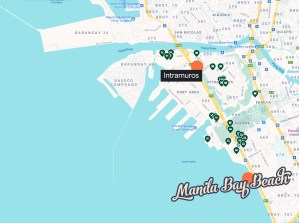 The Walled City is the oldest district in Manila; Intramuros is all there was of Manila before the 20th century. 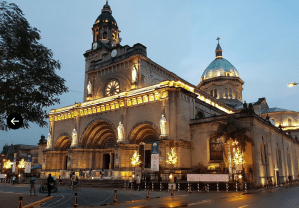 It is a tight grid system contained by sturdy 16th and 17th century walls, and is a big contrast to the high-rise cityscape around it.

This was the capital of the Spanish East Indies from the 16th century to 1898, and has the appropriate churches, courtyard palaces and administrative buildings in beautiful colonial architecture.

Like many old colonial settlements Intramuros has the strange feeling of a European city centre far from Europe.

Look out for the statue of King Carlos IV on Plaza de Roma, the newly restored Ayuntamiento building and the Puerta de Isabel II gate, with a statue of the Queen, among other sights and attractions. 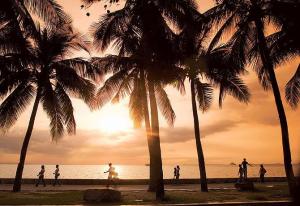 The Manila Baywalk and beach locations are arguably the best place to catch the world-famous Manila Bay sunset.

Entry to the Baywalk and beaches is free. 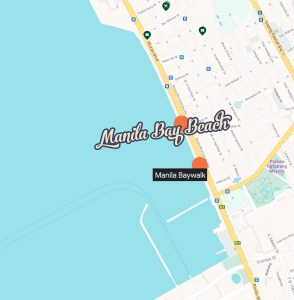 From a spectacular marine-themed park, Manila Ocean Park — a marine-themed entertainment destination — has evolved into one of  Metro Manila’s favorite tourist havens where everything is about life and living. 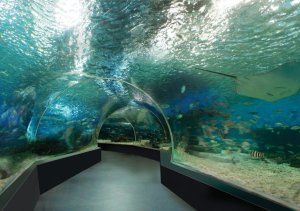 An array of exciting attractions, enriching marine-life exhibits, dining and lifestyle options, as well as an enticing view of the bay, all come together to form an integrated resort experience that offers the best of life both under and over the sea. 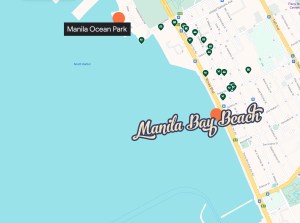 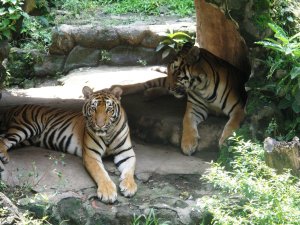 The Manila Zoo, formally known as the Manila Zoological and Botanical Garden, is a 5.5-hectare (14-acre) zoo located in Malate, Manila, that opened on July 25, 1959. 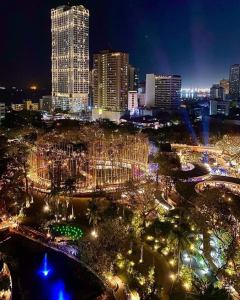 Although the Zoo is currently closed for a ₱1.7 billion-budget clean-up, rehabilitation and renovation — a 30-foot waterfall in the lagoon, a big cat enclosure, a marsupial exhibit, a monkey enclosure and a restaurant, among infrastructure improvements — the re-developed city zoo is expected to open for public in early 2022. 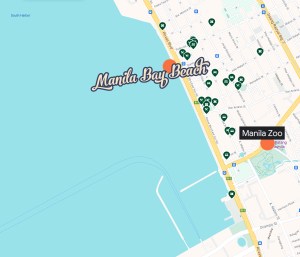 National Museum of the Philippines, the

When someone says museums, we usually associate it with artificants and all-things-boring. But the National Museum of the Philippines proves you otherwise. 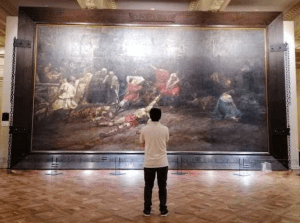 The National Museum, also known as Pambansang Museo in local language, dates back to 1901 which is a government agency museum that includes research and conservation programs throughout the archipelago. You will not just see a collection that dates back from thousands of years ago but you’ll also see some of the most modern works of art inside the National Museum including the notable Spoliarium—a gigantic painting more than four meters high and seven-and-a-half meters wide, making it the Philippines’ largest painting—created by Juan Luna.

Further, the National Museum of the Philippines is an umbrella government organization that oversees a number of national museums in the Philippines including ethnographic, anthropological, archaeological and visual arts collections.

Since 1998, the National Museum has been the regulatory and enforcement agency of the Government of the Philippines in the restoring and safeguarding of important cultural properties, sites, and reservations throughout the Philippines. 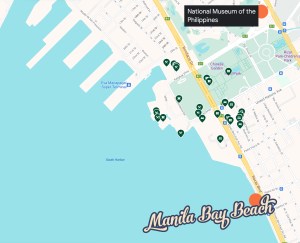 The city of Manila is known for so many things—cool museums, preserved Spanish structures, the world’s oldest Chinatown, and the historic sites where some of the most significant events in Philippine history took place. Mention this city and without a doubt, Rizal Park automatically comes to mind. 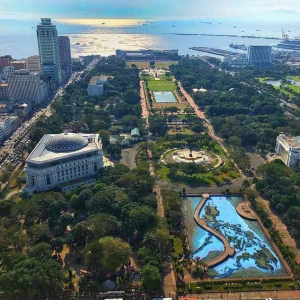 Also known as Luneta Park, Manila’s iconic 58-hectare park is considered as one of the most historical places in Manila because this is where Jose Rizal was executed on December 30, 2896—the day that led to a revolution.

His remains were dumped in an unmarked grave at the Paco Cemetery but in 1898, it was transferred to the Rizal Park monument in Luneta under American rule. 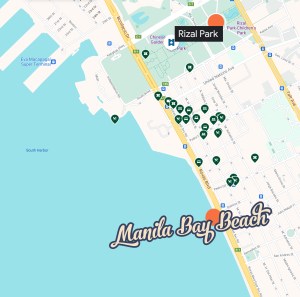 Beyond being a place of worship, San Agustin Church is a masterpiece that many travelers look forward to visiting in Manila. 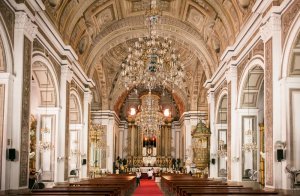 Built in 1595, San Agustin Manila, officially known as Church of the Immaculate Conception of San Agustin, is the oldest church in the Philippines. It exhibits remarkable features such as retablos (altars) of high Baroque style and wall buttresses separating cripto collateral chapels. What makes it unique is its ceiling paintings in the tromp l’oeil style.

The centuries-old church bore witness to the 400 years of Spanish rule in the country. It has survived many bombings and earthquakes, and through its countless renovations, incorporated other influences including Filipino and Chinese designs. Clearly, the church stands witness to the rises and falls of the Philippines. 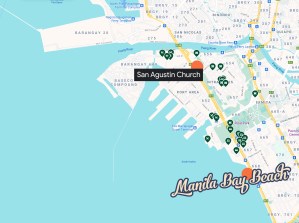